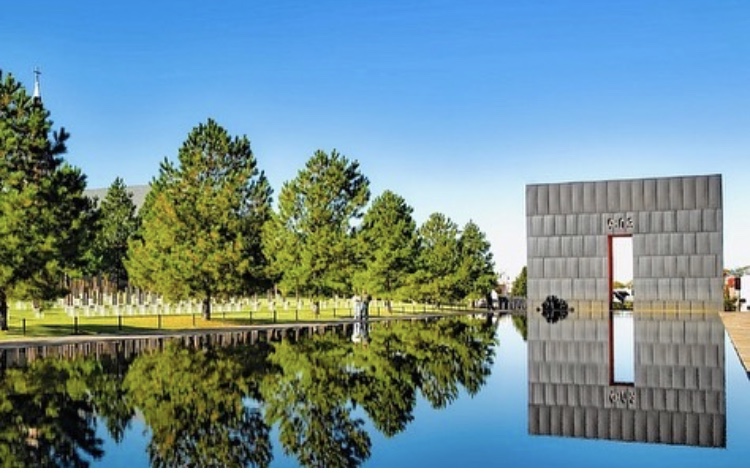 On this 25th anniversary year of the Alfred P. Murrah Federal Building bombing, we reflect on the incredible action of Junior League volunteers who joined forces with citizens from every corner of our city.

On April 19, 1995, Blinn House, JLOC Headquarters at the time, was offered to the Red Cross as a blood donor site and even though the site was not needed, the League provided a $6,300 donation for the Red Cross to use on that first day.

Our members staffed the FBI Volunteer Center, located downtown in the former OPUBCO Building, by logging in rescue workers and dogs from around the country and distributing ID badges.  They sorted toys for children who were injured or who had lost family members.  They worked the phone banks for the American Red Cross and KOCO Channel 5.  Our volunteers also wrote thank you letters and made thank you calls on behalf of the Red Cross.

On an individual basis, League members donated blood, assisted the victims and survivors at the Family Center, donated food and time, supplied fresh flowers for the firemen’s beds at the Myriad, worked with rescue workers and drove with our headlights on around-the-clock for weeks.

Former Red Cross Volunteer Coordinator Debby Hampton remembers telling Red Cross Board Chair Sue Ann Hyde that she didn’t know where to find customer friendly volunteers willing to stand up to the National Red Cross’s organization and delivering careful and thoughtful service to everyone they encountered. Sue Anne told her to call the Junior League sustainers. Debby contacted the Junior League and was assigned to Bev Coon as the League’s coordinator. Debby remembers calling Bev at 3:00 a.m. one day and requesting 50 volunteers by 8:00 a.m. and being amazed how every single request for League volunteers was filled—no matter how many times the Red Cross called.  Later, when Debby traveled the country speaking to other Red Cross chapters about what happened right in OKC, she encouraged each chapter to get to know their local Leagues and praises the capabilities of League volunteers.

The Junior League of Oklahoma City donated the corpus from our Community Emergency Fund, $50,000, to the Oklahoma County Red Cross in the weeks following the bombing.  We also planted a dogwood tree in the southwest corner of the Blinn House courtyard to honor those who perished. 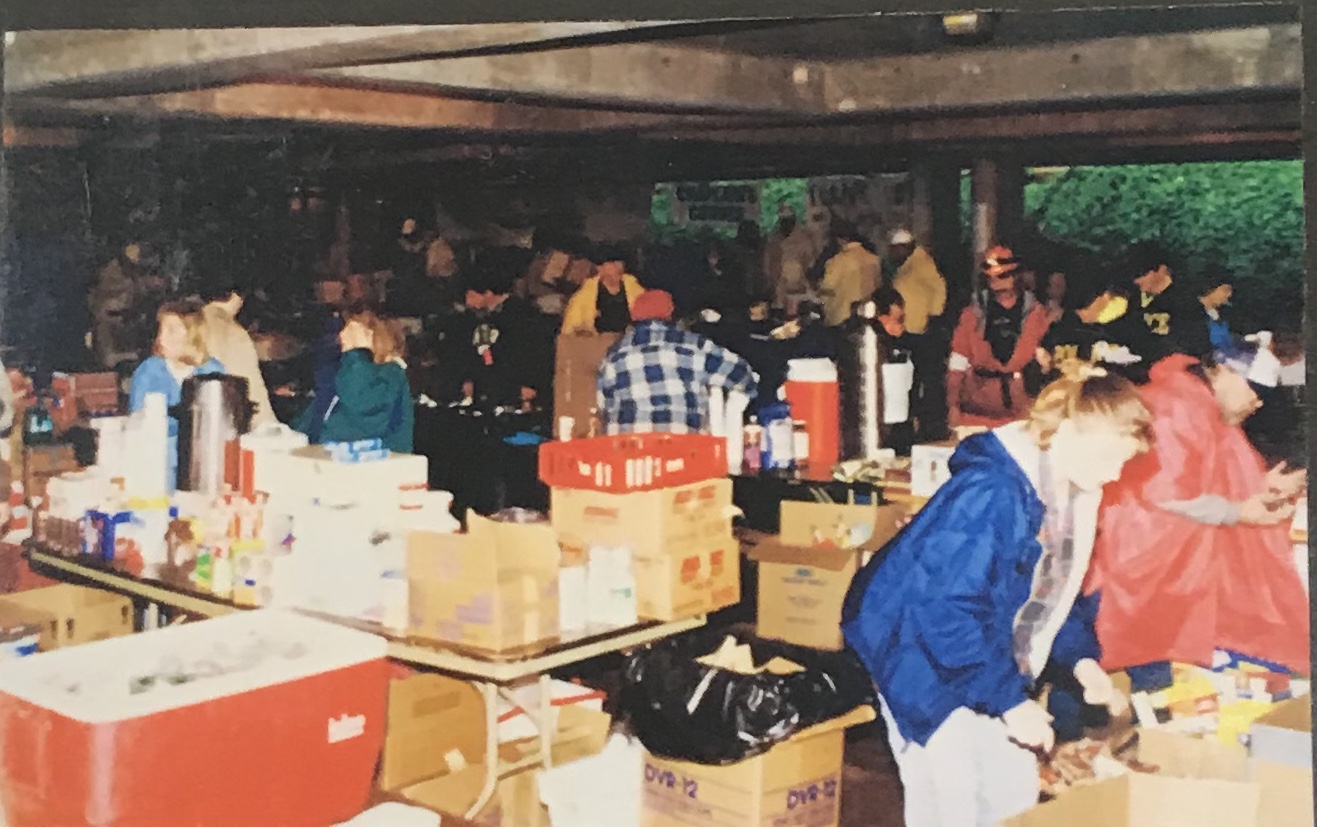 116 U.S. and Canadian Junior League and individual members donated $68,770.56 to the JLOC Murrah Building Disaster Relief Fund.  Their gifts ranged from $25, from a Canadian member who had recently visited Oklahoma City, to $5,000, from the Junior League of El Paso.

The Junior League of Honolulu sent 35 individual checks from members of their League with a letter from their President, Dr. Nancy Pace, that read, “The enclosed checks were collected at our last General Membership meeting and are sent to the JLOC with our wish that these monies be used in some way to alleviate the suffering caused by the recent tragedy in your city.  The thoughts and prayers of the Junior League of Honolulu are with you and residents of your city.”  Each member’s name and the amount of their gifts were listed on the letter.

Adelaide Liedtke, 1994-1995 JLOC President, recalls the letters from other Leagues “broke my heart.  I couldn’t quit crying for two weeks.”

The $68,000 donated from other Leagues was carefully distributed by our Grants Review Committee headed by Robin Pierce. She along with Pam Newby, Lisa Berry, Mary Dean Streich, Sarah Malloy and Bev Coon attended meetings of The Oklahoma Resource Coordination Committee established by the Oklahoma City Community Foundation and the United Way.  The committee of about 20 nonprofits met weekly to distribute funds.  The League chose to provide funding for the immediate and long-term needs of victims and families.

Over twenty individual gifts were allocated from the League donated fund. 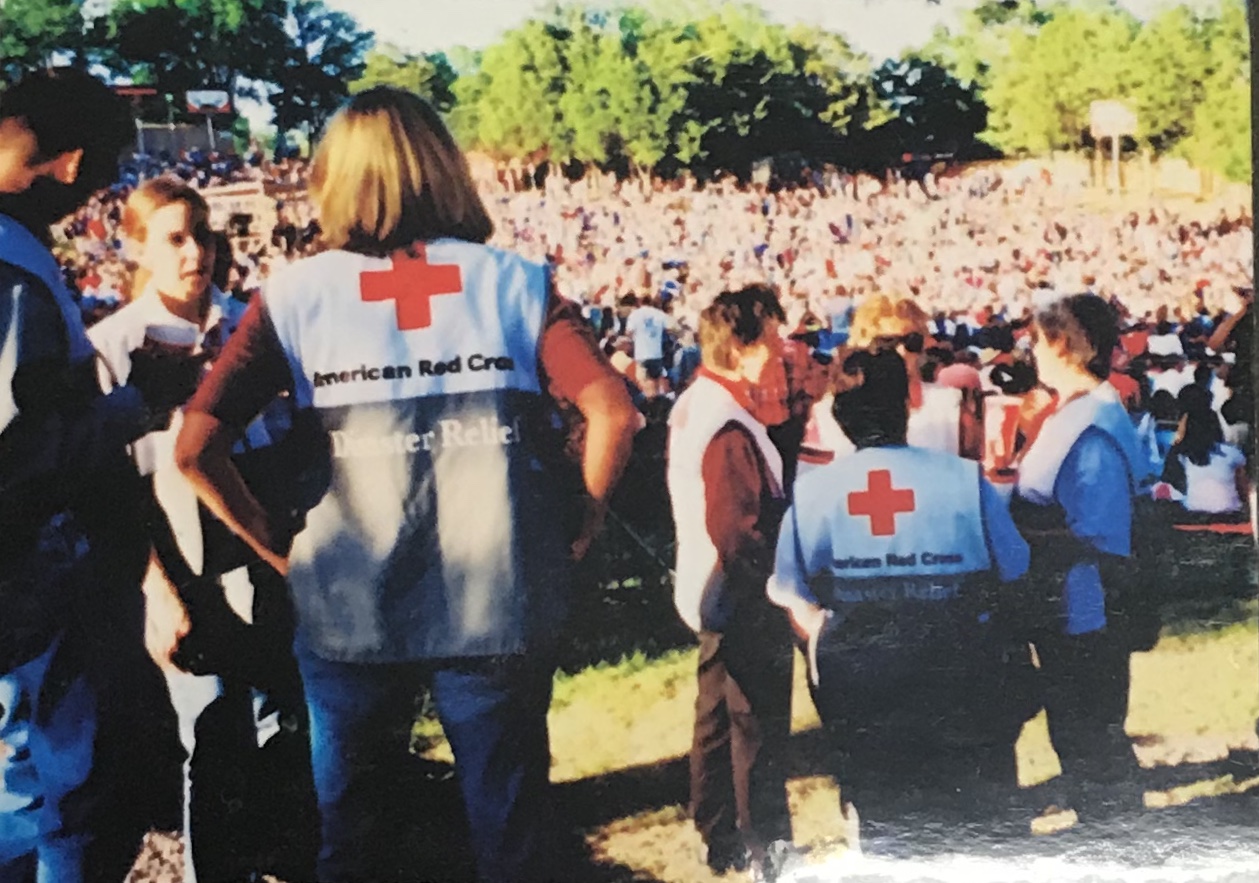 Shortly after the bombing, Mayor Norick appointed Karen Luke as Vice Chair of the Memorial Foundation.

Beth Shortt facilitated the creation of the Memorial’s mission statement developed through community meetings held all across the city. They bought two cases of golf pencils expecting 1,000 people at the Myriad for the first meeting and only about thirty appeared. They had interpreters for the hearing impaired and had carefully arranged to accommodate citizens of any ability for these meetings. Following the community meetings, the mission statement was created by a small committee of survivors, first responders, and citizens.  Beth said she used everything she learned through the Junior League’s Michael Doyle facilitation training. She says that creating the mission statement was the most satisfying facilitation work she has ever done. Beth also facilitated the committee that determined who was a survivor. She thinks that definition took 7-8 months, even longer than the creation of the mission statement. Bombing victim Polly Nichols was asked to Chair the $29 million fundraising effort for the Oklahoma City National Memorial and Beth Tolbert co-chaired the Design Selection Committee that reviewed 624 entries for the outdoor symbolic memorial from all 50 states and 23 countries.  Countless other League members helped our community rebuild.

JLOC stood side by side with civic organizations, churches, temples, nonprofits, corporations and individuals to help in a great time of need.  Your efforts have not been forgotten.

For more perspective on how our incredible members were called into action and how the Oklahoma Standard came shining through, click here. 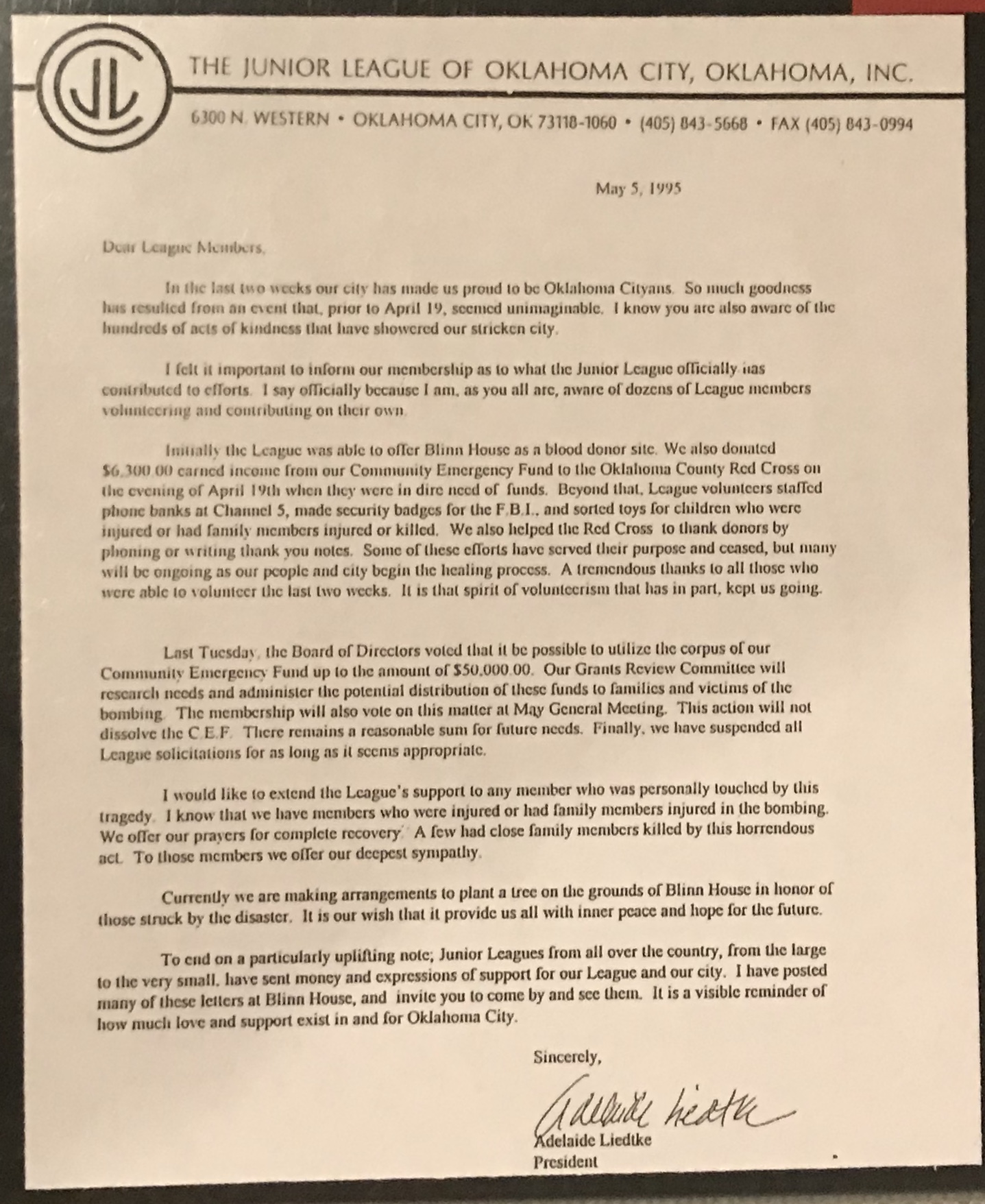 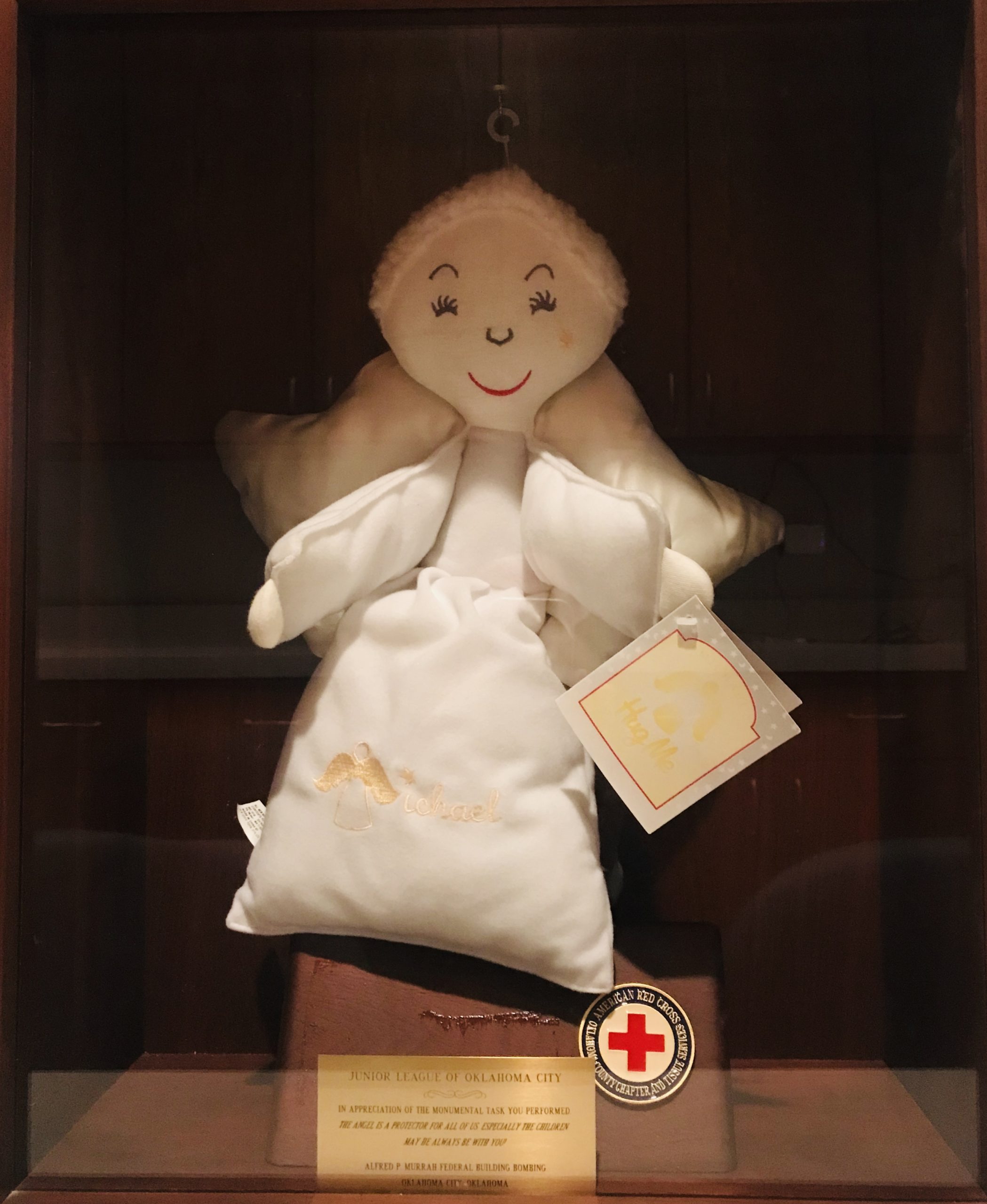